Maybe...maybe not...somewhere along the way, one realizes, that
Home is not a place, but a feeling!!!

Posted by M No comments:

Labels: A Point of View, Writings by M

On one such visit to Norwalk, CT, my colleague and me ended up visiting an aquarium for lack of something better to do. And we were pleasantly surprised. My favourite were Jellies. They are actually 95% of water and very calm and soothing on the nerves. Or maybe thats how they were presented. 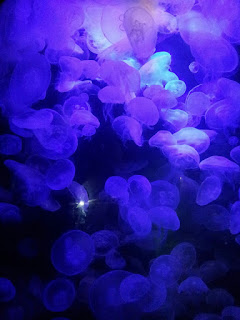 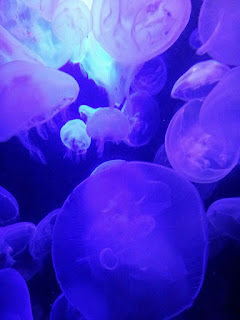 Another pretty picture to look at were these colourful Nemos. Quick movements and turns and responding to the tap on the glass wall. 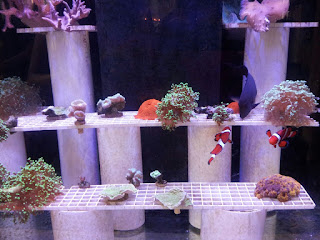 Imagine having cockroaches under the scanner. Well, these were sort of different. Though dont remember exactly how. 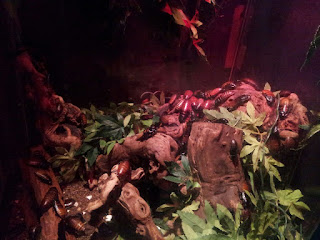 Wanted to share and well, sort of document this before my memory fades away. Sometimes, when you look at the pictures, atleast thats what happens with me, there is a nostalgia and a smile on one's lips... but I somehow miss the entire story!!!
Posted by M No comments:

My work has started taking me across continents. Across cities. I like to believe that I am a traveler and enjoy every bit of it, however when one travels for work, it is different. Its not the same thing. But, given that work takes you around, you might as well see around for a bit. Not exactly a traveler and not exactly a tourist. This would be somewhere in between.

During the last year and the current year, my work has sort of 'gifted' me with almost 4 visits to the US of A to the same place :-/. Not that one has a choice but then work is work and you got to make best use of your time, professionally and personally.

Have been landing up time and again at Stamford, CT which is close to an hour away from New York City. Stamford being a small place, has a small downtown and couple of 'go to' places like a museum or the river front. The major attraction of this place is its proximity to New York City (NYC). Well, and when you do go to NYC, for the first time, you do end of doing the touristy stuff. We arrived at Grand Central Station via train. Its a beautiful train station. The ceiling has designs of constellations embedded in it and it has a very active market, eateries and even an Apple Store. I think it has atleast 4 levels to it.

Couple of things which we covered over the weekend, with adequate energy levels along with sensible clothing and walking shoes are the Statue of Liberty, Rockefeller Center, MET Museum, Central Park and Times Square towards late evening. For some cases, we decided to take the hip hop bus but once we were in the central business district we were mainly on foot.


Have visited most of these places with work colleagues. It was fun and good time spent. New York City has very similar vibes to that of Bombay a.k.a Mumbai. Gelled in instantly... as if I had know this place for quite sometime. The traffic, the commute and the sense of urgency... calmed down by the river / sea as the case may be. In the midst of all the hustle and the bustle, you do manage to find the quite and calmness. Would love to be back here :-).


Noted this broken down car near the Mahim Station Wall in Mumbai. Ready to be dismantled and discarded. Been lying here for quite sometime. This was a mobile shot taken from a taxi. What makes it interesting to me is the battered and tattered condition of the car along with the interesting wall art on the station wall. It sort of gives a character to the condition of the car. The car has been removed recently from the spot. Everytime I cross the road, I see the wall art cartoon but I miss the car!!!
Posted by M No comments:

I try to capture unique or random things or moments on cell phone. This is one of them. Painted on the wall of Mahim Station. Remains of a city activity which had once allowed its citizens to particpate by painting the walls... which most of the times are in its worst state of maintenance. Liked the geometry of this wall art and how it attracts your attention without giving any particular message...well thats how I look at it. Am sure thats not what the painter had in mind but nevertheless, putting it up here to share...

Morning sunshine...
Rushing through my window...
Waking me up from a deep slumber...
Wishing me a very lazy Good morning!!!﻿
Posted by M No comments: